To compare it to something in the vanilla world, this collar holds the weight of a promise ring. Well, at least to some extent. Promise rings hold a lot of meaning for those who wear them, but they don’t necessarily represent absolute loyalty. The same applies to this collar.

Your Dom will want to test you before making things official, and you’ll be wearing your collar of consideration during that period. On the other hand, this will be a testing period for you too. Wearing this collar allows you to figure out if collared life is for you or not.

Once you pass your trial phase, it’s time for training. Becoming a Sub isn’t as easy as people make it out to be. The willingness to submit isn’t enough. You must be trained to act properly or as a true Sub should. While you’re in training, your Dom will probably make you wear a training collar.

This collar can indicate a good relationship between two kinksters, but you don’t have to wear it all the time. In fact, you’ll make an arrangement with your Dom. Most Subs will wear them only during the training, which isn’t all the time.

Training collars have special meaning because they represent the fact that your Dom thinks you’re worthy, and they see potential in you. However, some slaves/submissives wear this collar for a long time before moving on to the next step.

On the other hand, your Dom might also have the responsibility to watch over you. That means they won’t be able to mingle as much as they want to. That’s why protection collars exist. They let other Doms know that you’re taken, and they should leave you alone. These collars will give you more freedom to move around on your own instead of following your Dom around.

This type of collar will work most of the time, but some Doms can be persistent.

These are probably the most common collars people wear. Even if someone doesn’t want to fully commit to the Dom/Sub life, they can try wearing this collar. Many people have different kinds of kinks where wearing one of these will fit right in. So Submissives wear this type of collar during role play sex or any other type of play.

Play collars come in various designs. That’s because they should fit with the theme, scene, or aesthetics. Looking for one isn’t that difficult, and you’ll definitely find something that suits you. These collars usually have accessories dangling from them. We’re talking about bells or loops for a leash. It all depends on the kind of scene you want to participate in.

So how do they manage to wear a collar in public then? Well, a day collar can be just about anything! It can be any necklace gifted by your Dom. If you want to keep things a bit more traditional, it can be a choker. Nobody will be suspicious because chokers are popular nowadays.

That’s how you’ll be able to wear a collar in public, and nobody else will know what it truly means. It will be your exciting little secret. 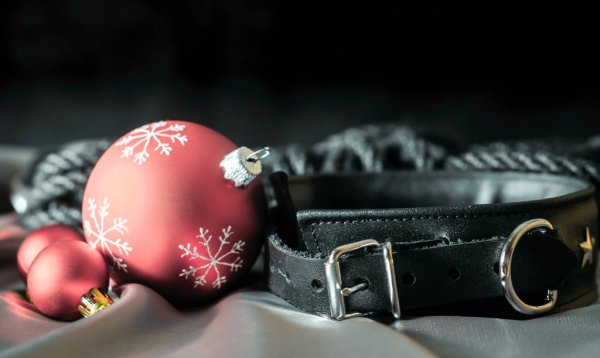 The final step in collaring is receiving a permanent collar. This one holds the weight of a wedding ring. That’s right! It means that your Dom is serious about this relationship. On the other hand, this is the type of collar you won’t take off… ever. Well, unless there’s a medical emergency, and your Dom gives their permission. Hopefully, there won’t be a need for that.

Naturally, if you break things off, this collar will come off too. Breaking up in these relationships is entirely possible because slaves/Subs aren’t prisoners of their masters/Doms. Plus, maybe you’ll want to take a break from the D/S lifestyle, which is perfectly fine too. Things can get overwhelming fast, and communicating this to your Dom is essential.

Your master will understand the need for this collar to come off. You can even go back a step or two before you’re ready for the permanent collar again.

Having a dominant partner can be lots of fun if you’re ready to commit to that kind of lifestyle. Being a good submissive means you can get rewarded with different types of collars that hold a lot of meaning. If you’re into vanilla sex but want to explore a bit — try wearing a collar during your next sexy time session. We promise you won’t regret it.