But does sex necessarily need to be involved? Whether you’re whipping/being whipped in a professional dungeon, or “experimenting” with a blindfold and some 50 Shades-approved fluffy handcuff merch, once you start thinking about the world in terms of power-exchange, you’ll see that this dynamic permeates our lives — everywhere.

Ladies were always getting tied to train tracks by villains in old movies. Who knows how many were actually enjoying it? And no great spy movie is complete without the kidnapping-victim-squirming-free trope.

Spencer Tracey used to dole out celluloid spankings to his (at the time) secret darling Katherine Hepburn. And let’s not forget James Bond remains the ultimate Dominant, though sometimes consent can seem a little murky.

Almost every sitcom from the 1950s onwards featured a domestic situation where the man was the Dominant and the women the submissive. Barbara Eden’s genie literally says “Yes, master!”

Making nice – or not so nice – with cops. 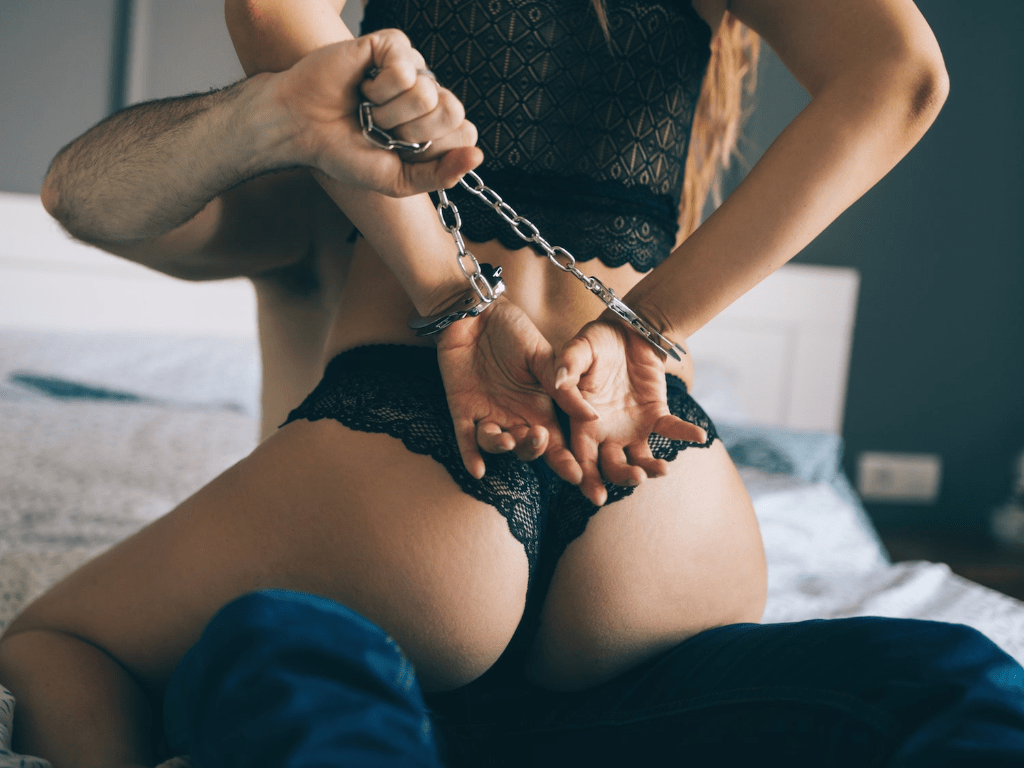 Putting aside the kinky boots, motorcycle and handcuffs (!!), the whole point of being stopped by Mr. or Ms. Leather 2016 is that they have the authority and you don’t. The law arguably attracts a more Dominant personality, even if those preferences don’t extend to the bedroom (sometimes they can be reversed as a welcome relief from being in charge on the job.)

Besides the force needed to subdue a suspect, the idea of being a “Top” and “Bottom” applies to a traffic stop from Highway Patrol. Ever tried to get out of a ticket?

This is an example of what’s called “topping from the bottom.” Sometimes acting more submissive when receiving a ticket can make a Dominant officer less inclined to write up a violation, but be careful this doesn’t backfire and inflame your cop’s inner Sadist.

Lapping up excellent service from waiters.

Another great example of “Topping from the bottom” are waiters who approach 10,000 times per meal, interrupting conversation to ask “how the meal is tasting.” While they appear to be submissive, they are actually taking the power by consistently popping up to remind you to leave a good tip (even if they have just been Dommed into this by management).

If you have been a server or had one, you know that the best ones maintain the illusion of servility while still taking control by upselling the customer with desert or expensive liqueur. Part of what rich people pay for in a high-end dining experience, or any luxury service, is the opportunity to make people do what they want when they want it.

Minding your P’s and Q’s with your landlord/landlady.

Think you can get away from this power dynamic via home ownership? Anyone who has ever owned a home has at one point had to “take the pain” in the form of Home Owner’s Associations, property taxes or building regulations.

Feeling the burn as an “athlete.”

Athletes are the original masochists. Why else do they love “feeling the burn” so much? (Perhaps they just like the discipline, uh….)

Besides professional athletes who punish their bodies as a career, willing to dope themselves into peak performance, even weekend warriors who complete triathlons and train obsessively at the gym and long distance runners risk muscle soreness at the very least and permanent injuries at worst. If you’re going to lose a toenail because you bruised it running, some part of you better be relishing either the experience or the re-telling of it.

Athletes also tend to refer to themselves in the Third Person, i.e., “You just try to mess with Iron Mike…”, a highly Dominant trait.

Taking direction from your boss, or directing your own subordinates as you please.

It’s almost redundant to point out how much your boss loves telling you what to do. Nothing is more invigorating to a boss than chewing out an underling, because they used to be where you are and therefore feel they have earned the right to be Dominant.

Even if you’re not the boss, you might already be in deep. Didn’t you enjoy that time when, as the newest employee, you got to boss around the intern?

Dating anyone. At all. Ever.

Perhaps you need to be “wooed” for sex with words or expensive dinners. Or maybe you enjoy torturing Tinder dates with your unavailability. These are all covertly Dominant tactics. Perhaps you’re a man who likes to treat his girl like a “princess,” or a woman who wants a Daddy to spoil you. Maybe you always want your partner to “take the lead” in bed. These are all D/s dynamics common in what could be referred to as “vanilla” (conventional) sexual relationships, without so much as a blindfold or a silk scarf in sight.